If you’re new to the Mac, be it this is your first machine or your switching from another system like Windows, you may be not be familiar with a number of Mac terms and phrases.  This article will helps serve as an intro into the Mac world and a quick overview of hardware terms used in it.  This article will be updated as new ones come out or we find others we may have missed.

The Command key drives a lot of the keyboard shortcuts and, well, commands on the Mac.  Many are well known if you’ve used Windows or Linux.  Cut, copy, and paste are Control-X, Control-C, and Control-V respectively on those platforms.  On the Mac, these are the same except you use the Command key: Command-X, Command-C, and Command-V respectively.  Many other common keyboard shortcuts are handled this way too.  Some Mac unique keyboards are also handled with the Command key, such as Command-Spacebar to bring up Spotlight, or Command-Shift-3 to take a screenshot.  Even in startup, the command key handles some features, such as using Command-R to enter the Mac’s recovery mode, though this isn’t the case with all startup functions.  More often than not, if you’ve can run a command from your keyboard, it starts with the Command key.  It is represented by the ⌘ symbol

One other note, if you’re using a Windows keyboard, the “Windows” key serves as the Command key.

The control key acts an an additional modifier key.  On a Windows keyboard, it is also mapped to the Control/CTRL key.  While it typically doesn’t do as much on Mac as it does on Windows out of the box, many apps will use for their own in-app commands.  Likewise it’s very handy for mapping your own custom keyboard commands in something like BetterTouchTool.  Lastly, it can be held while clicking down on your trackpad or a left click with your mouse to get a context menu.  It essentially functions as a right click.  It is represented by the ^ symbol, though it shouldn’t be confused with the ⇧ symbol, which represents Shift, as seen in the image above.

FireWire is an old connector standard developed originally by Apple in conjunction with several other groups like Sony, Panasonic, and a few others.  It also goes by several other names depending on the brand that’s using it.  On Macs they are called FireWire, on Sony devices they’re called i.LINK, Lynx on Texas Instrument devices, and the technical specification IEEE 1394.  It had some benefits, such as direct memory access, consistent file transfer speeds, less resource intensive on a machine’s processor. It was also used on Macs for Target Disk Mode. However between inconsistency of the naming, more expensive hardware, and a variety of other factors, Firewire ultimately lost out in the public eye to USB, and FireWire itself was later supplanted by the Thunderbolt ports.  It can still be found on legacy Macs with either the older FireWire 400 (seen on the right in the picture above) or the later FireWire 800 connector (seen on the left).  You can connect them to Thunderbolt with the proper adapters.

MagSafe is the original charger style that came with MacBooks prior to the release of the USB-C and Thunderbolt 3.  The name comes from the fact that it has a magnet that helps the charge connect to the small charging port.  Strong enough to keep it connected, but in the event the cable was yanked or tripped on the charger would be pulled out of the magnetic socket and leave the MacBook unharmed. There are 2 generations of MagSafe, called MagSafe 1 and MagSafe 2.

MagSafe 2 had a thinner, but wider profile for the thinner designed MacBooks they were making at the time.  They come in 45W, 60W, and 80W varieties for the Airs, 13-inch MacBook Pros, and the 15-inch MacBook Pros respectively.

The Option key acts primarily as a modifier key.  It is used in some keyboard shortcuts, but tends to used more to access hidden functions or extra symbols. For example, If you hold down Shift-1, then you’ll get the ! symbol; if you press Option-1, you’ll get the ¡ symbol.  This can be use with other modifiers, such as the Shift key to get other symbols, such as holding down Shift-Option-1 to get the  ⁄  symbol (note this isn’t a slash, which looks like / ).

The Option key can also be used to access hidden options.  For example, if you click the WiFi logo in the top right normally, you’ll have the option to turn off your WiFi antenna, see nearby WiFi networks, and a few other connection options.  If you hold down the Option key while clicking on the WiFi symbol, you’ll see a lot more information, such as your IP, your MAC address, and much more.  Likewise, if you go to the Apple menu in the top left hand corner and hit “Shut Down”, the Mac will give you a countdown to shut down and asking if you want to relaunch any apps when it reboots, while giving you the option to shut down now or cancel it.  If you hold down the Option key while hitting the “Shut Down” option, it will skip all this and immediately shut down your Mac.

The Option key is represented by the ⌥ symbol and is mapped to the ALT key on a Windows keyboard.  You’ll commonly see many Mac keyboards with the text “alt” above the Option text.

Thunderbolt (not to be confused with Lightning on iOS devices) is a type of data connector and port developed by Intel and assisted by Apple. Despite the popular assumption, the spec was not developed nor is owned by Apple.  Apple assisted Intel in the development, but ultimately Intel is the owner of the spec.  The connection provides stable high-speed data initially at 10 Gb/s in the original version and up to 40 Gb/s in the most recent versions.  It originally replaced the Firewire ports on the Mac, and later the regular USB ports as well.  In both versions, it is also used to connect 2 Macs together in Target Disk Mode. 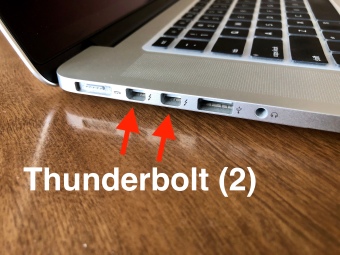 Thunderbolt 1 and 2 use the same ports, and are really only different in data transfer speeds.  They use the same connector as Mini-DisplayPort, so Mini-DP connectors will work and display out to screens with that connection or through an adapter.  However, in order to get data through to the monitor or another device, the device and cable being connected to the Mac must also be Thunderbolt, represented by a Thunderbolt symbol with an arrow pointing down

Thunderbolt 3 piggybacks onto the USB-C port and uses the same connector as USB-C, making a slimmer profile, halving the power consumption, and adding the ability to power MacBooks through it ultimately replacing MagSafe.  All Thunderbolt ports and cables can act as USB-C cables, likewise all USB-C cables will work with Thunderbolt 3, albeit with less speed potentially.  However, not all USB-C ports are Thunderbolt (on the Mac side, only the MacBook uses USB-C along, the MacBook Airs and Pros all use Thunderbolt 3).  Best to make sure you know what cable you’re getting for your machine.

The touchbar is an OLED touchscreen at the very top of the keyboard on all MacBook Pros from 2016 onward (with the exceptions of the 2016 and 2017, 13-inch MacBook Pros. All models come with a TouchID sensor on the far right side. Some have a physical escape key on the far left side, while other have a virtual escape key that is part of the Touch Bar.  This second screen acts as an additional menu, such as letting you pick words the AutoFill might recommend or emojis while typing messages, letting you scroll through video in your iMovie timeline, or adjust color settings in apps like PhotoShop.  It will also perform other functions that were previously part of the physical function keys like adjust your screen brightness, volume, etc.

Touch ID first appeared on the iPhone 5S in 2013 and has been a staple of the iOS line for years.  It was brought in 2016 to the Mac family with the introduction of the first Macbook Pro with Touch Bar.  It sits in the top right corner of the MacBook laptop, and acts as both the power button for the laptop and the fingerprint reader for authentication.  When setup, it can be used in place of your Mac’s password to authenticate app installations, buy apps from the Mac App Store, use Apple Pay on websites, and more.  It is available on the latest MacBook Airs and Touch Bar MacBook Pros, but not on any desktop Macs.

USB-C is the new hardware version of USB, and Apple was one of the first computer vendors to hop on board the spec.  It offers a slimmer profile, faster speeds, the ability to easily do data transfer, networking, displaying to external screens, and even charging devices in either direction (for example charging your phone with your laptop or charging the laptop with your phone).  It’s one port to rule them all.  All the current Macs come with Thunderbolt 3, which piggybacks off the USB-C standard, so they have USB-C functionality.

However from 2015-2019 Apple sold the MacBook that only had USB-C, but no Thunderbolt.  USB-C cables will work, but certain functions are more complicated.  If you want to connect to another MacBook in Target Disk Mode, you’ll need a compatible USB-A to USB-C cable, but if you want to do that and use Migration Assistant to transfer your data and profile to another Mac, you can only use a USB-C to USB-C cable.  Since this particular MacBook has been discontinued, and all other Macs now have Thunderbolt 3 and USB-C combined, it’s less of an issue.

If you click a link and purchase something through our articles, these may be affiliate links through which we earn a commission.  Commission on products do not affect editorial ability or direction, and we try to add affiliate links to items we either do or would recommend and use ourselves.  We do not take money or affiliate commissions from companies in exchange for reviewing their products.