The Other Digital Connections

If you haven’t been out of the country, you need to go. I especially encourage you to go somewhere that doesn’t speak your native language (but at least have some way to communicate, whether by translator or by learning the language).

This is something I realized quickly in the Dominican Republic. I didn’t feel rushed, I didn’t feel compelled to constantly check my email or Twitter, I felt relaxed. I admit I did feel a little out of the loop in terms of news, and I did check back in every couple of nights to make sure I hadn’t missed anything too important. But while the lack of things like WiFi weren’t surprising for me, two other things about technology really struck out at me.

When we talk cell phones, we talk generally about smart-phones: iPhone versus Android, the falling of BlackBerry, the underdog rise of Windows Phone 7. We talk about the latest model, the amount of RAM, and how fast the Internet is. All of this conversation is surrounding the idea that we are becoming a more mobile world, where the laptop and desktop is no longer everyone’s go to system. It’s the smart-phone in your pocket or the iPad in your bag. Mobile technology is the new thing.

That’s not necessarily the same in the Dominican Republic. While I can’t say that I saw a lot of iPhones among the Dominican population, the use of cell phones as a tool was visible. Many people, though more city dwellers than rural people, had cell phones that they used to do everything. In a place where we still saw Internet cafes, the cell phone was still a tool of choice. If we want to talk about mobile revolutions, let’s look at the D.R., where the use of a constant communication device is becoming more normal than a owning a full blown computer. In the developed world, we are so used to everyone having a some Internet connected device, whether it is a standard computer, a phone, or a tablet. Many people have some combination of the three, the majority having a desktop or laptop as their primary system. But for developing nations, I don’t see this being the same trend. I can see the developing world leap-frogging over the standard computer, and embracing the mobile world, full of tablets and smartphones. This certainly isn’t the type of thing that will happen overnight, but it is something that we’re already seeing, which brings me into my next point.

I was part of a medical mission trip to the Dominican Republic. One crew was a licensed medical providing free medical care for any family who needed it. I say families, because it was usually a mother with several children coming in for herself and her children. If you’ve ever been around children, however, you know that they would rather play around than sit and wait. Get enough of them in the same room, and

you might as well have a small riot on your hands, which is not good in a medical room. Thus there was the second crew, college students whose primary job was to keep the children entertained with games, tricks, and lessons. It also involved attempting to stay on your feet while several young children were trying to throw you to the ground in various games. These children crave attention, and just enjoyed any attention would could give to them as we played. They could be rough, they could be rambunctious, and overall very silly and playful. They loved to move around as much as possible.

But their demeanor completely changed if they saw anything that resembled a camera. They wanted pictures, lots of pictures. While the younger children were happy to have their picture taken, the older children loved to pose for the camera. They wanted to look like the celebrities they adored in sports and movies. More than that, they wanted to take pictures of everything else. The lush mountains, their friends posing, the one kid hanging in a tree, or the silly American watching them use his camera. They didn’t care about lighting, color correction, or the rule of thirds; they just wanted to take pictures and show them to their friends. Sometimes the things we get passionate and technical about are the things other people just want to use, play with, and remember their lives with.

I was particularly caught by the use of the iPhone in the Dominican Republic. One girl had brought her iPhone to use as a camera, while setting the phone itself into airplane mode to not get any roaming data charges (which if you’ve never heard the stories, the rates are ridiculously high). On the very first day working, she pulled it out to take some pictures of and with two young girls. As soon as she did, of course, the children wanted to use it. What really surprised us was how easy it was for the children to use the 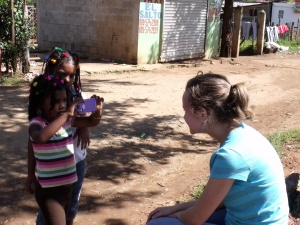 iPhone to take pictures. Without any attempt at direction through our language barrier, the two girls were able to take a picture and then immediately view them and flip through their other pictures. Some of them did quite well. At this point, I could remark about the simplicity and ease of use of the iOS system. I can also point out that the girls might have already had some experience with an iPhone or iPod Touch, so they could have already had the knowledge to use it. But I will not bother with either. What I will remark on is how the children and my teammate were able to use such a small device, a phone nonetheless, to connect with each other, even with a linguistic barrier; how such a tool can be used to start conversations and expand each others’ worlds. How far we’ve progressed with cell phones, cameras, the Internet, and bringing it all into an easy to use package, and how we as people can so easily learn these things.

As I returned to the United States, or at least the WiFi enabled airport, my tablet came alight with Twitter updates, emails, and the other things I have come to expect. There was several stories I caught my eye and I read while in layover, but I still thought of the Dominicans. I couldn’t help but think about the pictures I had taken, the people I had met, the things that I saw, and the time that was spent just being with other people. I kind of enjoyed my time without technology, but I hadn’t entirely left it. What I saw was people who didn’t care about what version of Android or iOS they were using. They didn’t care about how many megapixels were in their cell phone’s camera. They had a life to live, and technology was just an assistant to that, if even at all. We’ve taken technology for granted, whereas for many of these people, technology is still something fresh. I say this not to demean the Dominicans, I only said it put it in perspective. We in the modern world have come to expect technology everywhere, anytime, and to always work. We get mad when it doesn’t live up to our expectations. But for many people in the world, technology hasn’t fully come to them, and neither has the spread of information. I know it’ll take time for these things to happen, but here’s my hope: that we in the modern world whether it is Asia, Europe, or the Americas, will realize the wonderful things we have been given with this technology. Whether it is an iPhone, an iPad, a MacBook, Droid, whether it’s a Windows computer or Linux server, that we do not abuse it or be consumed by it. Let us remember that the goal of technology is to make the human race better, in mind, body, and spirit. So the next time you send that picture via text message or Skype someone across the country, remember to be thankful for what we have, and use it for a greater good. And don’t be afraid to let someone else take that picture.

Tell me what you thought of this blog post: did you like, do you agree? Disagree? I want to hear your thoughts. Let me know in the comments below, or by sending me an email at easyosx@live.com You can also check me out on Facebook, Twitter, and YouTube by hitting the buttons on the top of your screen. You can also check out my Google Plus. Thanks!