App of the Week: Rockmelt

A few weeks ago, I wrote about the fall of the Flock browser. Flock was the social browser that kept a sidebar to watch your Facebook, Twitter, and other social feeds and blogs. I mentioned another browser in that post that had rivaled Flock, but is now THE social browser: Rockmelt. Rockmelt runs of Chromium, the same engine as Google’s Chrome. It works on Windows, Mac, and also for iOS (iPhone, iPod Touch). It works best with Facebook (it has been called the Facebook browser), but also has sidebar apps for Youtube, Twitter, automatic RSS feed detections, Tumblr, and its own Read-Later feature (which I have found very handy). 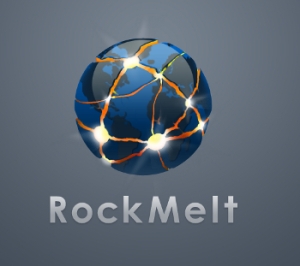 It looks mostly like Chrome, but it has small sidebars that are called “Edges”. On the right side is your “App Edge”, which keeps up with your social feeds, Facebook notifications, the Read-It-Later app, and RSS feeds. It also is the place where you’ll see any Chrome extensions you’ve download. On the left side is your “Friend Edge”, which is specifically a feature for Facebook. It allows you to see which of your Facebook friends is online, post to their wall, send messages, and of course chat with them without having to go to the Facebook page. You will also notice that, unlike Chrome, there is the standard “omnibox” (url and search bar combined) and a search bar, with a “Share button separating them. The share button allows you to instantly share the webpage your on with Facebook, Twitter, and/or Tumblr. The search bar allows you to search for anything, but then preloads the top 5 results in the background without you having to load any new tabs.

Since the browser runs on Chromium, it is very fast going from page to page, and the tests done show that it consistently only runs behind Google’s Chrome itself. The browser’s startup time is a little slow, but given the deep connections it has with logging on to Facebook, as well as any other networks Rockmelt connects to, this is understandable. However, compared with the initial version of the browser, it is a definite improvement, as you don’t have to wait for Rockmelt to log into Facebook before doing your browsing. The browser also keeps your connections secure as far as I have found, so not as much need to worry there.

It is important to note though that at this writing, the blog is still in beta, version 2 to be precise. There are still some bugs in the browser, such as occasional log-off hangs, occasional chats not getting sent through the chat app, etc. All and all though, this is a very well built browser. It has continued to grow and get better from its shaky beginnings, and I look forward to further development for what is now MY browser of choice.

Again I’m sorry that I’m late with the post, but things down here in the Southern US haven’t been easy. This past week we had terrible storms across several states, and while I suffered no more than a few leaks, there were several friends of mine who suffered worse. On top of that, its college exam week for around here, which doesn’t help.

Please support the recovery efforts in the South, Japan, and around the world. Thanks.

Times out page has been viewed